I had just put out the produced version of my anti-Amazon.com, pro-Phoenix-Books song a couple of days before, so it was a thrill to be able to play the thing live for real. I can’t thank co-owners Renee Reiner and Mike DeSanto enough for letting me be part of the festivities and, even more important, for opening Burlington’s only indie, new bookstore in the first place.

I hope I made a good enough case for the store’s importance in last week’s post, so I’ll just add for anyone reading about this for the first time that you, yes you can be a part of this community-supported and community-supporting endeavor. Just visit http://JoinPhoenix.com to learn more.

Delivering remarks and cutting the ribbon? None other than Burlington’s brand-new Mayor, the Honorable Miro Weinberger: 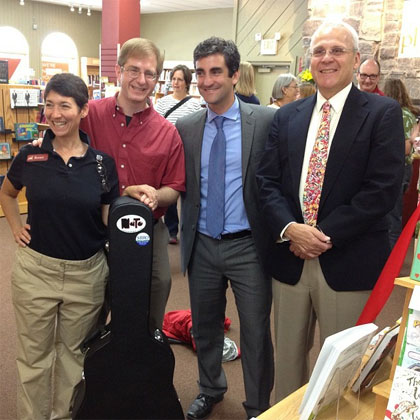 Thanks and hugs to Rich Nadworny for being such a strong supporter of local Vermont business, not to mention for filming the video in the first place as well as taking the pic! His digital branding efforts are starting to become the stuff of legend.

* “Mayor Dubs”?!? OK, so maybe I’m the only person in #BTV who says that. But let’s face it, the name “Mayor Weinberger” is intimidatingly multisyllabic, and “Mayor Miro”, while alliterative, is completely inappropriate. But “Mayor Dubs”? OK…also inappropriate…but flows nicely. Calls to mind those old “VDub” ads for Volkswagen with Peter Stormare or even, more au courant, dubstep. I’ll keep using “Mayor Dubs” until his lawyers inform me otherwise…